Home / Android / How to turn the night mode in Android 7.0 Nougat

How to turn the night mode in Android 7.0 Nougat

To begin with, let us recall, “corporation good” is not the first year trying to enter a “night mode” in your mobile system. Google first flattered user expectations before the release of Marshmallow, then announced and introduced it into the pre-assembly Android N. But, as it turned out, place for “night mode” was not found in the final release of Android 7.0 Nougat.

In fact, the developers have not removed this feature from the system and made hidden in the system interface. As Google explained, that it caused some performance issues. It is possible that after their elimination, “night mode” may appear in a future update, but there is a chance that, this feature can be completely removed from the system. To activate the “night mode” will need ADB (a tool that enables knowledge control on the device based on the Android operating system from a computer) and corresponding his application. Of course, this opportunity not only for advanced users but also for all the Android enthusiasts. This was made possible by the Android-application developer Michael Evans, who wrote a small program to activate the “Night mode” on Android 7.0 Nougat. Moreover, ADB knowledge is not necessary, a simple program that can use it, even ordinary users. 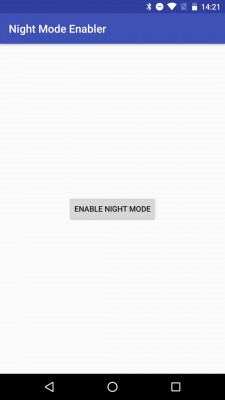 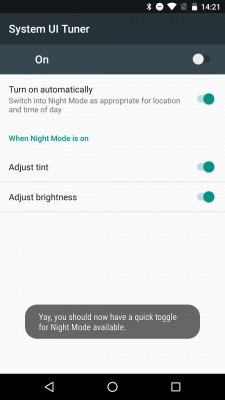 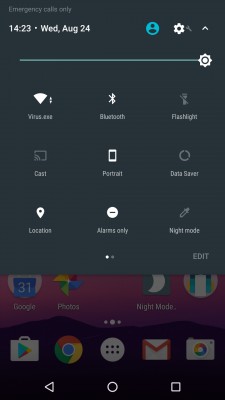 Instructions on how to add the option “Night Mode” in the system interface Android 7.0 Nougat:

This is not “dark theme”, which many expect to see in the new system, but, nevertheless, a useful “trick” that works at the system level. Maybe some will wonder, what is a night mode in practice. In simple terms, this decrease in the brightness of the screen of the mobile device and change the intensity of the “cold” blue light on a “warm” yellow-orange. It is known that bright blue light in the evening and at night (from a TV, monitor or smartphone screen) severely affects not only vision but also in the has many other impacts on users.

In addition, the light emitted by such displays prevents the production of melatonin which is responsible for sleep and biorhythms. The “night mode” in any case, is a positive effect on the perception of the light source of various devices. For example, many applications for reading electronic books have this option, and there are a dozen utilities that specializes in adjusting the color temperature of mobile devices.
Share